'Twas the Night Before...

'Twas the night before an IEP centered meeting (technically, we're reviewing his 12 different assessments to see his current level and start talking about placement,) and this mommy is sweating some major bullets. 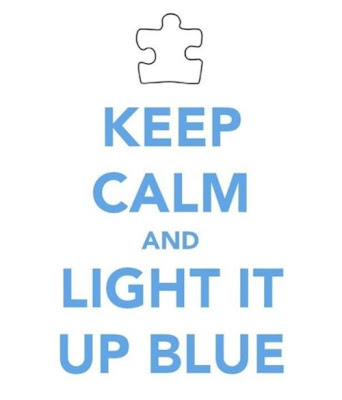 Why is is that I can handle IEPs like it's no big deal... it IS my job, after all, to go through data, monitor progress, write IEPs, and provide services.. but my own child's meeting gets me every time? I've always been one of those students with really bad test anxiety... and this feels like I'm taking the AEPA (teacher certification in Arizona) all over again, but instead of just pulling out the knowledge, I have to deal with my emotions, too.

Tomorrow basically pinpoints whether or not our interventions have been enough. They'll tell me whether he is ready to go to a Gen-ed Kinder with, or without, a One-on-One Paraprofessional. A one-on-one is my ideal scenario, but I know that it's a lot harder to come by than it should be. I'll also find out whether or not he has a cognitive impairment (mental retardation) IQ level, or if he has emotional disabilities. OR, I'll find out if he qualifies for the Autism program... but it's most likely not happening, because the district only has one level of the autism program for Kinder. Why, when we just recently found out that the prevalence is 1 in 88 kids now?? Obviously, Caydon's not the only one at his level in our school district. 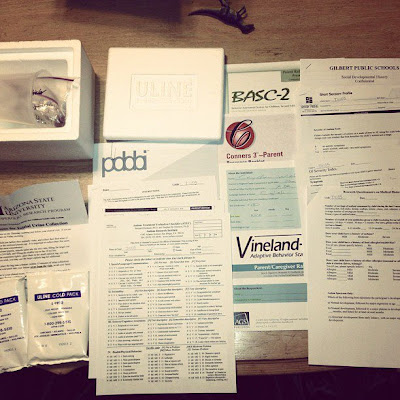 His assessments, also with some from his ASU Autism Study (like the urine sample)
This reminds me of the time that I told Caydon's pediatrician that Caydon's eyes were dilating really weird, and that he started headbanging. We were going to monthly appointments because Caydon's speech regressed and he started stemming in addition to a bunch of other symptoms (possible celiac, and his asthma and allergies were out of control). This was before we had officially entered into the world of autism. Our amazing pediatrician sent us off to a nearby hospital for stat blood work, a stat CT Scan, a stat EEG, and an immediate appointment following with the neurologist to discuss the results.... all of which she arranged in front of me via the phone. Let me tell you, that a scary moment. That's the moment when you lace your fingers together in front of you because you need to hold someone's hand, and if holding your own is the only option you have, you'll take it. Tell me I'm not the only single mom out there who does this in moments I need someone to lean on but don't have that other half, so I find it in myself??  What was even more nerve wrecking was when the neurologist sent us for a stat MRI because they found "concerning grey area" in his brain and "wanted to ensure whether or not it was tumorous" (or whatever his original doctor spiel was. I'm the annoying mom who tells the doctor to lay it out in words I can comprehend). We were literally sleeping on a bench at the hospital for nearly a week. Charming? You tell me... 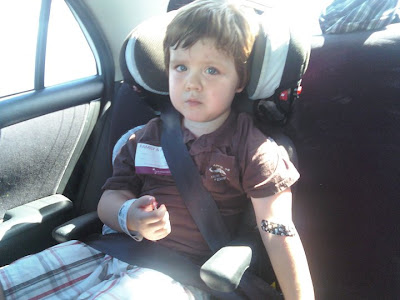 Leaving the hospital after our sudden dose of giving blood vials, so we could grab our stuff and stay up all night for an EEG. We were supposed to go to the zoo that day... 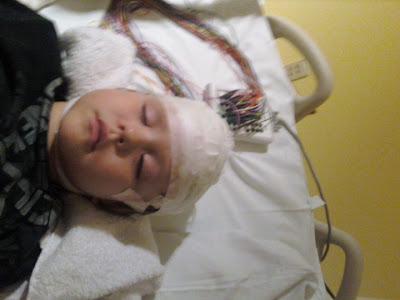 His first, but not last, EEG 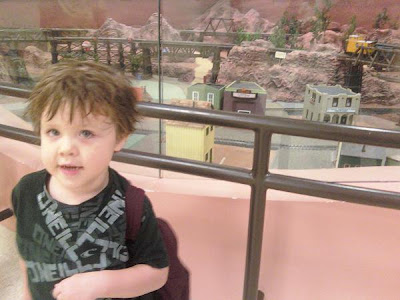 We looked like bums wandering around the hospital...way cute.
Confession time for this teacher. When Caydon's preschool told me at our last meeting that they think he is cognitively impaired, I went into a "don't cry" mode and literally tuned out everything they said to me. I wanted so badly to be strong and not cry... I teach kids with mild mental retardation (cognitive impairments to be PC) so it's not like it's foreign to me... but I literally couldn't acknowledge anything they were saying past this point. All I could think about was leaving and resuming everything at the next meeting, so that I could get alone and have my cry sesh. I mean, really, what kind of teacher does that? I still feel like a hypocrite saying that, but I know that I'm certainly not the only one in the world who is overprotective of their kiddo, and doesn't want to acknowledge the worst, right? Right!?

Anyways, I need to do more research and prep some more for tomorrow's meeting. I am sweating bullets, and I need to drop it. The anxiety is killlling, though. This would be a good time for some xanax (but I'm not a pill-popper), or a good time for a run. I literally almost went on a run.. but by the time I had my two ponytail holders in, three sports bras because of my fear of more sag on, my feel-like-clouds running shoes, and my running shorts set, little man was passed out on the floor. So anxiety and stress it is for me, tonight. 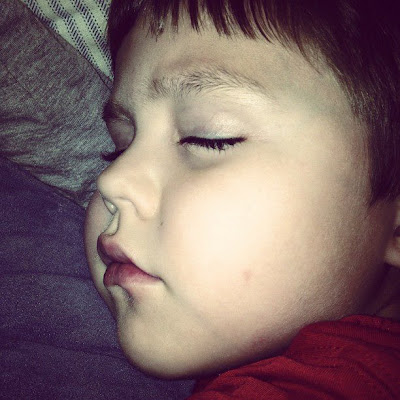 Please be sure to say a prayer tonight and tomorrow. I will update once I know what is going on I'm recovered from a much needed (either way) happy hour. Please pray I don't break down crying like a heartbroken mom, or show too much excitement like a selfish mom, or tune out in fear like the overwhelmed mom, but that I can remain professional and strong for Cay. Thanks!!
Posted by Kelsi at 9:38 PM