I couldn't resist... us moms, we deserve our own little play on the popular meme that's going around. I know it's my perception, but I'm assuming I'm not the only one that experiences these stereotypes. 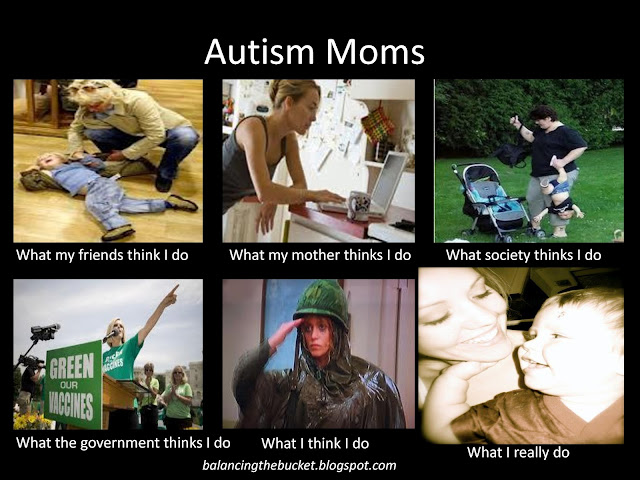 What my friends think I do- Apparently, we fight meltdowns all day. I would be lying to say that most of my friends have left us hanging... stopped inviting us to playdates and birthdays.. because of Cay's differences. Whether I agree with it or not, it's reality. What's sad is that those who look deeper realize that there is so much more to Cay than meltdowns, most just choose not to. I'm so thankful for the friends who have taken the time to realize that autism doesn't define my child or my parenting, and that meltdowns don't define autism.. it's just a part of our world and the meltdowns are a result of a rough autism moment.
What my mom (and dad) thinks I do- My mom, who has her grandma goggles glued on tight, refuses to think that Caydon's autism is more than a reaction to my facebook addiction. Let's just say... I don't own a computer, and I don't own a T.V.   I read when Cay is asleep. So, really? Autism is a result of my facebook addiction? Umm... ok. sure thing, mom.
What society thinks I do- Oh, my, if looks could kill. My favorite moment is when Cay is having a meltdown or doing something quirky, and someone gives me a dirty look. I am absolutely the person who says something back, often along the lines of "staring won't cure his autism!"   I don't neglect or abuse my child... he has autism, and I have nothing to do with it except for trying to help him out. But, wow, the looks I get when I have to restrain Cay so he doesn't dart in front of a car or hurt himself.   'Nough said.
What the government thinks I do- Hah! I think the Jenny McCarthy stereotype kind of rubs off on people that don't know autism beyond her advocacy and "rain man". The government seems to think that we are all a bunch of anti-vaccine (even though I am.. but I'm so much more complex than this!) fighters who don't have anything better to do with our surplus of time than to fight it. Really? Fight for what my kiddo needs? Absolutely. Fight for it just because? Umm... not so much. Fight excessively? Far from it. I like the time.   Just because biomedical treatments seem to be effective for some kids, and vaccine seems to make sense for others, doesn't mean I'm a green shirt wearing, tree-hugging celebrity. ((I should also mention that this isn't intended to be a McCarthy bash. Kuddos to her for helping her son, even if I would have done it differently...))
What I think I do- Get ready for war! Some days I love autism.. it makes my boy SO unique and awesome. Other days (when he's beating me up and I can't do much to stop it but wait for the change of tides, for example) I absolutely hate it. Then you add on the fact that I teach special education and I'm in a world of autism... and, yes, I go to war with it daily. Maybe I'm not quite as prepared as one that has on her military gear, but some days, I could use it. I am still adamant that I do this, on a 24-7 basis. :)
What I really do- Without a doubt, I love my boy! I can assume that any parent who helps their kiddo that has autism, without a doubt, loves their little one. This picture is actually of Cay and myself, when he was a wee one. I adore it  because Cay had just gotten stitches. No "owie" seemed to phase him for the longest time, and he was happy as a clam when walking into ER to get stitches. After the fact, he was being super sweet and cuddly. Couldn't resist a little photo session, and I'm so glad I did. This picture reminds me that, even when he couldn't communicate love, I know he felt mine and he felt it in return. It makes me smile because it took place before he was able to tell me he loves me, but how can you possibly second guess the relationship the two of us have?? I'm certain, without a doubt, that this relationship goes on for all families affected by autism. We all share the willingness to do anything for our kiddo(s), while sharing the confidence that love can be spoken, even when words can't be used.
Posted by Kelsi at 7:54 PM